I have been meaning to add a new rant for some weeks now and have been uninspired. I thought about

going on my rant about money and the pain it brings me, but I somehow doubt complaining about it will

bring me the cash I want, and despite what my flooded email inbox keeps telling me, there are no

sources of "free money" out there. Also, I seriously doubt that a patch is going to make my penis

bigger. I have very small feet and being that I am female, my chances are about nil of growing my own

large penis. So needless to say I have my doubts about the validity of the email I have been getting

Then there is the news. I am just annoyed with the whole middle east thing. Personally, if I had the

option, I would move to Moon-base Alpha and watch as the Mideast just duke it out and nuked the place

to sand. Unfortunately, there was this catastrophe with Moon-base Alpha and I think it's gone now.

Very disappointing. Where are my tax dollars actually going? Oh yeah they are going to Iraq, along

with all the plywood. But the plywood thing, that's a rant for another day.

I am also angry. I am angry because I live in a world where it is acceptable to be a rat bastard.

The qualities that are most rewarded these days are the ability to screw people over (And drive badly,

but I describe that in my previous rant). People who screw others over profit while the ones they

screwed have to pay taxes. That is it in a nut shell. It really pisses me off. But it does not piss

me off as much as I was pissed off by the TV program Futurama.

You may ask, why would Margret be pissed off at an innocent TV cartoon? What evil could it have done

that would make Margret bitter and angry. I will tell you; it was one episode. It was an episode

for a few minutes, not even an hour or two. But for over a week, the most fleeting thought of the

show made me cry. And I am not alone. Here's proof. Read this link:

It madeÝ him cry too. Here is the story:

Century. He and Bender go to check it out and find that it is Panucci's Pizza, the pizzeria where Fry

used to work in 1999. The fossilized remains of Fry's dog Seymour are also on display.

In a flash back to 1997, we see Fry being sent to deliver pizza for a prank call to "Seymour Asses".

There he meets the stray dog, whom he names Seymour after the prank caller. Seymour and Fry become

very close and Seymour even becomes the mascot at Panucci's.

Back in 3003, Fry manages to get Seymour back. Farnsworth Tells Fry that he can use the cloning

machine to bring Seymour back to life. He says that he has enough living tissue to initiate a full

cloning and even maintain the dogs memories from when he was alive. Fry gets very excited and buys

all sorts of doggie stuff which makes Bender extremely jealous. When they finally start the procedure

to do the cloning, Bender gets so jealous though and throws Seymour into a pit of molten lava. (They

are using the lava as a power source for the cloning machine.) Fry is devastated, but Bender suddenly

realizes what he has done and jumps into the lava to save the dog.

We flash back to December 31st 1999, where Fry is about to deliver a pizza to "I C Wiener". Seymour

doesn't want Fry to go, but Fry pets him and promises he'll be back soon. The next day Fry isn't back

yet, and Seymour starts looking for him. Seymour finds him at the Cryogenics lab, and barks at the

Cryo tube to try to get Fry free. Unfortunately neither the staff nor Fry's parents see Fry in the

tube and Seymour is taken home by Fry's parents.

before initiating the procedure, Farnsworth reveals that the dog was 15 when he died and Fry realizes

Seymour lived a long life after Fry was frozen. Fry figures that Seymour forgot about him a long time

ago, and halts the cloning. However, another flashback shows that Seymour waited outside Panucci's

Pizza week after week, month after month, year after year for Fry to come back for the rest of his

life. We see the dog grow old, scrawny, and inconsolable for the loss of his best friend who would

never return. Through the whole flashback they play the song "I will wait for You" by Connie Francis.

The dog just waits there for Fry to come, but Fry never returns. Since Fry never clones the dog, the

dog never gets his only wish of being back with Fry again. I have never seen something so heart

wrenching in my entire life. 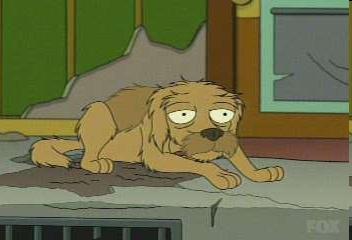 Why does this anger me so much, you might ask. Well I watch this show to get a few laughs, to escape

the pain that is in my life. The last thing I was expecting was such heart wrenching sorrow. They

should have had some kind of disclaimer like "Warning: This will make pet owners cry." or "Warning:

Do not watch if you are bummed out or have any psychological issues with abandonment." I mean damn!