A Day Without an Alien

Capital City (Reuters) - A one-day nationwide strike and business boycott got underway on Monday to demand legal rights for millions of illegal aliens, with many U.S. businesses shutting down voluntarily to avoid disruption.

Early reports suggested many of the estimated 11.5-12 million illegal aliens in the country were obeying a call to stay away from work and boycott businesses, despite a mixed message from extraterrestrial-rights organizations, some of which opposed the action.

In Gotham City's Robinson Park, the normally bustling open-air market operated at a fraction of its typical activity. On Grand Avenue, the usually chaotic sidewalk shops of cheap import goods were mostly shuttered.

"Everyone's an alien here. The only real Terran is the Earth itself," said Vulcan-born Spock, a science officer with the Star Ship

A bill passed by the House of Representatives in December that would make all illegal aliens into felons provoked a mass protest movement, bringing people who previously worked and lived in the shadows of U.S. society into the streets.

Across the country, several major meat-packing plants were closed but operators had tried to prepare for the shutdown by stepping up production over the weekend.

Fast food company Ninja Burger Corp. said some of its restaurants were operating with limited crews, for shorter hours or drive-thru service only. The company said it strongly supported immigration reform to "protect employees, employers and ensure the security of our nation's borders."

Police in Central City were bracing for two massive marches, with hundreds of thousands of aliens and humans expected to heed a call from Mayor Milky McCheese, Elder God Cthulhu and others to make their voices heard.

Police in Metropolis were also expecting up to half a million people to march, while smaller rallies were planned in most major cities across the nation.

Recent polls suggest a majority of Americans would support legislation being debated in the Senate that would allow many illegal aliens to join a legal guest worker program and later apply for citizenship. An NBC/Wall Street Journal survey last week found 68 percent would support this with 28 percent in opposition

However, the same poll found that only 17 percent of Americans thought the day-long boycott and strike would help the aliens’ cause, while 57 percent said it would harm it.

The walkout caused a dispute over strategy within the ranks of alien-rights advocates for precisely that reason, with some fearing the action would trigger a backlash.

Yet proponents say the move was needed to prod President Bush and a divided Congress to end an election-year squabble and enact legislation.

Illegal aliens, who flood across the neutral zone at a rate of half a million a year, play a crucial role in the U.S. economy, working mostly at low-paid jobs in agriculture,

construction, restaurants, as janitors, meat packers, maids and gardeners and many other occupations.

"We are all losers if we continue to play this sinister game of condemning a segment of the population to live and work in the conditions of modern-day slaves," said Chewbacca, director of the Alien Movement USA. 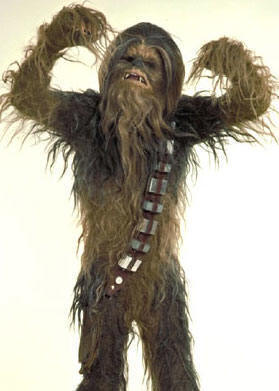 A recent study by the American Farm Bureau Federation said a crackdown on illegal alien labor could cause production losses in U.S. agriculture of $5 billion to $9 billion in the first one to three years and up to $12 billion over four or more years.

Teachers' unions in major cities have said children should not be punished for walking out of class.

In Gotham City leaders of the May 1 Coalition organizing the boycott said a growing number of businesses had pledged to close and allow their workers to attend a rally in Robinson Park.

Passing immigration reform has been difficult because the Republican Party is badly split on the issue between those who support giving illegal aliens a path to citizenship and hard-liners who want to focus on beefing up border security and punishing companies who employ illegal aliens.

The House passed a get-tough bill last December that would reclassify illegal immigrants as felons, punish

those who help them and build several space stations along much of the neutral zone.

Bush opposes the boycott and so do many members of Congress, including Sen. Harry P. Ness, a Delta City Democrat helping lead a bipartisan drive to reform overall immigration laws.