The worse pain I have ever felt viewing a video screen.  Here is my tale of woe.

Some of you may have heard my story of the first day I saw the "Mighty Morphin Power Rangers." This was a tale of hope, anticipation and finally great pain.

Fox had been advertising the airing of the "Power Rangers" for sometime.  It was supposed to be this great action kids program, and though I was an adult it sounded cool to me.  I was a twenty something.  I was fresh out of dropping out of college.  It was a Saturday morning, my friend and I hit the beers early and tuned in with the hope that we would be amused.

Well, the show started.  I scream grasping my ears to save myself from the pain of the dialog.  I howled in agony, "please change it, it hurts, it hurts!  My friend flipped the channel to "American Gladiators". At this point my ears stopped bleeding, by the pain had not completely subsided.  After reading a passage of Shakespeare, my pain subsided and I had to strength to down some aspirin and begin my arduous path to recovery.

That was back in my party-hearty days.  Maybe my resistance to such things was low.  Maybe over time as I grew older, and led a healthier lifestyle, I would be able to withstand such things.  I thought so.  I am after all able to watch "Elmo" and "Teletubbies" with my nieces, no problem.  As I said, I though I was safe.  That is until last night.

Last night I was working out at the gym.  Good wholesome, healthy activity. Running on the treadmill.  Running, running, running.  Happy Margret, running.  Watching music videos on the "Sports Club Network".   Decent range of videos. It was enough to distract from any tedium the workout might have had.  I ran, and watched, I was content, peaceful, even maybe relaxed.  That's when it happened - the great pain.  And its name was "Steps".  Suddenly there are these people in white jumpsuits singing their version of the Bee-Gee's Tragedy, while... I can hardly say it, doing dance steps that resembled some kind of sadistic voguing.  What was this?  Was it a kids musical or something?  I saw children in the audience mimicking these evil demons in their ritualistic dance.   I let out a gasp as I nearly had a stroke right there on the treadmill. It went on and on.  Teenagers and their parents in antennae with orange strobing globes on the ends, waving their arms to the music of these plastic golems created from magic of  the pop plane of hell.   I managed to hold on until the end.  Barely able to hang on, thankfully the next two videos were rap and alternative and just enough to counteract the harm done to my mind by this Satanic circus I was forced to witness.

Today I found myself questioning what kind of name is "Steps"?  It is a dance?  Is it really the bands name?  So I did some research.  They are indeed and  evil pop band.  They have been compared to "Abba".  I am really sorry "Abba".  I like you.  You are cool.  "Steps" is not.  I do not agree with this comparison.  Below are some pictures of "Steps".  They do not look like "Abba".  They look like someone's Barbie collection gone wrong, very wrong.  Do not watch the video I refer to.  I was already working out, my heart was already working harder.  I was reasonably ready for the shock. If you watch this unprepared, your eyes could bleed, you could experience dizziness or spontaneous diarrhea.  Don't risk it.  I have included the link to do the "Steps" Tragedy dance steps .  Please sit while reading it and have a phone near by just in case anything happens.  Don't say that I didn't warn you. 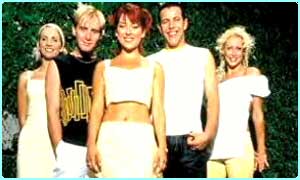 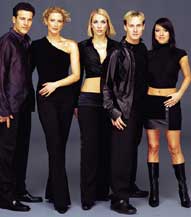 Here is the link to the pain.