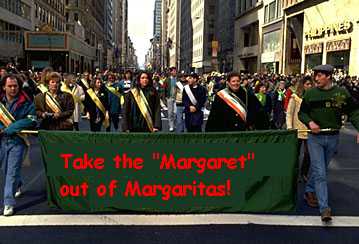 Ok, what the hell is this picture about?

The answer is below.Ý But first read thisÝ real news story (yes it is true). My friend G-Reg was so irritated by it, that he asked me to comment on it. Comment I shall. Please read, discussion to follow.

The request -- which has some suppliers furious and others busy re-labeling components -- came after an unidentified worker spotted a videotape machine carrying devices labeled "master" and "slave" and filed a discrimination complaint with the county's Office of Affirmative Action Compliance.

In the computer industry, "master" and "slave" are used to refer to primary and secondary hard disk drives. The terms are also used in other industries.

"Based on the cultural diversity and sensitivity of Los Angeles County, this is not an acceptable identification label," Joe Sandoval, division manager of purchasing and contract services, said in a memo sent to County vendors.

"We would request that each manufacturer, supplier and contractor review, identify and remove/change any identification or labeling of equipment components that could be interpreted as discriminatory or offensive in nature," Sandoval said in the memo, which was distributed last week and made available to Reuters.

The memo did not include any suggestions for alternative labels.

Dennis Tafoya, director of the affirmative action office, said in a separate memo that an "exhaustive search" had been undertaken to find all such labels and replace them with more "appropriate" ones. A form was sent to all departments to identify equipment carrying the labels "master" and "slave" or any other offensive terms.

Faced with an avalanche of complaints from vendors and the general public, Sandoval told Reuters in an interview that his memo was intended as "nothing more than a request" and not an ultimatum or policy change.

"I do understand that this term has been an industry standard for years and years and this is nothing more than a plea to vendors to see what they can do," he said. "It appears that some folks have taken this a little too literally."

Sandoval said that he had already rejected a suggestion that the county stop buying all equipment carrying the "master" and "slave" labels and had no intention of enforcing a ban on such terms with suppliers.

"But we are culturally sensitive and we have 90,000 employees," he said. "We have to take these things seriously."

Sandoval added that in addition to the e-mails he's received "telling me how stupid I am and how I should be fired" he has gotten a positive response from some companies willing to reexamine their labels.

In June, the Los Angeles city council unanimously passed a law requiring that any companies doing business with the city disclose profits they may have made from slavery in the 19th Century. In 2000, the council supported federal legislation seeking reparations for descendants of slaves.

Ok, ok. So let me get this right. It is illegal in LA to have a computer with a "Master" and "Slave" drive. Well, at least it is severely frowned upon. People may be offended. Ok, you know what? I am personally offended that my name could be confused with a mixed drink. I am offended at being associated with an alcoholic beverage. I suggest that we all rally around capital hill and force the government to rename the Margarita to something that will not offend those of the Margret persuasion. 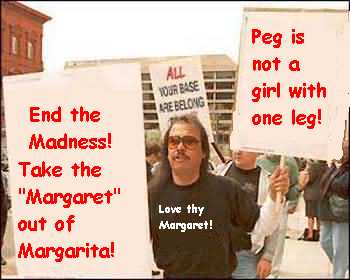 That is it. I am inviting everyone I know to go on a march. A march to protest the misuse of my name! All Margarets, Margrets, Marges, Pegs, Peggys, Mags and any other Margaret derivative are invited. We will pass legislation to put an end to all this anti-Margaret sentiment. I am a person dammit! I am not booze, or a one legged woman.Ý Together we can render the English language ineffective!